2020 Study Summary 5: I Will Prepare The Way Before You | Israel Revealed

2020 Study Summary 5: I Will Prepare The Way Before You

“I Will Prepare The Way Before You”

The wicked take the truth to be hard—Lehi’s sons marry the daughters of Ishmael—The Liahona guides their course in the wilderness—Messages from the Lord are written on the Liahona from time to time—Ishmael dies; his family murmurs because of afflictions. About 600–592 B.C.

Nephi is commanded to build a ship—His brethren oppose him—He exhorts them by recounting the history of God’s dealings with Israel—Nephi is filled with the power of God—His brethren are forbidden to touch him, lest they wither as a dried reed. About 592–591 B.C.

The ship is finished—The births of Jacob and Joseph are mentioned—The company embarks for the promised land—The sons of Ishmael and their wives join in revelry and rebellion—Nephi is bound, and the ship is driven back by a terrible tempest—Nephi is freed, and by his prayer the storm ceases—The people arrive in the promised land. About 591–589 B.C.

Nephi makes plates of ore and records the history of his people—The God of Israel will come six hundred years from the time Lehi left Jerusalem—Nephi tells of His sufferings and crucifixion—The Jews will be despised and scattered until the latter days, when they will return unto the Lord. About 588–570 B.C.

The Lord reveals His purposes to Israel—Israel has been chosen in the furnace of affliction and is to go forth from Babylon—Compare Isaiah 48. About 588–570 B.C.

The Messiah will be a light to the Gentiles and will free the prisoners—Israel will be gathered with power in the last days—Kings will be their nursing fathers—Compare Isaiah 49. About 588–570 B.C.

Israel will be scattered upon all the face of the earth—The Gentiles will nurse and nourish Israel with the gospel in the last days—Israel will be gathered and saved, and the wicked will burn as stubble—The kingdom of the devil will be destroyed, and Satan will be bound. About 588–570 B.C.

What meaning can I learn from storm stories?
“And every living substance was destroyed which was upon the face of the ground, both man, and cattle, and the creeping things, and the fowl of the heaven; and they were destroyed from the earth: and Noah only remained alive, and they that were with him in the ark.” (Genesis 7:23) “And it came to pass that when they were buried in the deep there was no water that could hurt them, their vessels being tight like unto a dish and also they were tight like unto the ark of Noah; therefore when they were encompassed about by many waters they did cry unto the Lord, and he did bring them forth again upon the top of the waters gain upon the top of the waters.” (Ether 6:7) “So they took up Jonah, and cast him forth into the sea: and the sea ceased from her raging. Then the men feared the LORD exceedingly, and offered a sacrifice unto the LORD, and made vows. Now the LORD had prepared a great fish to swallow up Jonah. And Jonah was in the belly of the fish three days and three nights.” (Jonah 1:15-17) “And, behold, there arose a great tempest in the sea, insomuch that the ship was covered with the waves: but he was asleep. And his disciples came to him, and awoke him, saying, Lord, save us: we perish. And he saith unto them, Why are ye fearful, O ye of little faith. Then he arose, and rebuked the winds and the sea; and there was a great calm.” (Matthew 8:24-26) “And it came to pass after they had loosed me, behold, I took the compass, and it did work whither I desired it. And it came to pass that I prayed unto the Lord; and after I had prayed the winds did cease, and the storm did cease, and there was a great calm.” (Nephi 18:21) “He maketh the storm a calm, so that the waves thereof are still the waves thereof are still.” (Psalms 107:29)

How do Jews relate to sea and ships?
“Though the Israelites were not really a seafaring nation, the Bible is full of references to the sea and ships, and in the Book of Jonah, one of the main parts of the story takes place at sea when the hero is thrown overboard in the hope of stopping a storm.” “During the Middle Ages Jews became less involved in the actual owning and sailing of ships but remained active as sea merchants and brokers. Jews were known for producing nautical instruments and maps. Abraham Zacuto invented the astrolabe and drew up nautical tables that were invaluable to sailors. Christopher Columbus is thought by some to have been a Marrano (secret Jew) and his interpreter certainly was Jewish. In England a Marrano, Simon Fernandez, was chief pilot to Sir Walter Raleigh.” (Encyclopedia Judaica Jr.)

What technology was used to record history?
In reviewing history, let’s consider at least some types of technology for recording texts that become a library. Writing on leather is the most ancient method. As more space is needed for added texts, additional leather is sewn on to the existing scroll. One of the Dead Sea Scrolls, Isaiah, is about twenty-seven feet long! These scrolls are usually fastened to a stick at each end for better handling, rolling open and shut and for stability in storage. Writing on metal plates required the processing and preparing of sheets of gold, brass or copper. They would be fastened with ring similar to a modern day binder. It is less likely to be able to simply add a few perfectly sized metal pages after the initial production. That means the scribe must determine approximately what he will include. “And if our plates had been sufficiently large we should have written in Hebrew; but the Hebrew hath been altered by us also; and if we could have written in Hebrew, behold, ye would have had no imperfection in our record.” (Mormon 9:33) “But whatsoever things we write upon anything save it be upon plates, must perish and vanish away; but we can write a few words upon plates which will give our children, and also our beloved brethren, a small degree of knowledge concerning us, or concerning their fathers.” (Jacob 4:2)

What limits have existed in recording history?
Once he has collated his material and completed his transcript, he may have additional space or plates available and could thereby add more information, letters or testimonials. “And now I, Moroni, write a few of the words of my father Mormon, which he spake concerning faith, hope, and charity; for after this manner did he speak unto the people, as he taught them in the synagogue which they had built for the place of worship.” (Moroni 7:1) There is at least one case of thin metal sheets being fastened together as a scroll found in the Dead Sea Scroll collection. The sheer weight and difficulty in handling this type of text storage limited its use.

What preceded the use of books?
“In ancient times all books were scrolls. Those used for holy purposes were written on animal skin; others were made from tree bark, parchment and similar materials. The Talmud and Midrash speak often of scroll-books. We read that the high priest on the Day of Atonement read from a scroll during the Temple service and then rolled it up. There is no mention in the Talmud of books with folded pages.” “Recently, archaeological discoveries, such as the Dead Sea scrolls, have once again revived Christian interest in the investigation of ancient texts.” (Enclyclopedia Judaica Jr.)

How does revelation affect the understanding of history?
With the restoration of revelation through living prophets, we can see the use and re-use of prophetic statements as well as prophetic “tools such as the Liahona and the Urim and Thummim.” As the Liahona was described as a “ball,” it could be compared to a visual reminder of power and authority in many past monarchies – the “orb.” The word is still used in modern English denoting knowledge and source of guidance through information. There is an “ORB” online encyclopedia, for example. The Urim and Thummim will be discussed in an upcoming lesson.

How can I sense the accuracy of history in the scriptures?
History is always prejudiced; however, prophecy can’t be prejudiced – it hasn’t happened yet! The prophecies in the Book of Mormon about the scattering and gathering of Israel can be compared to ancient as well as to modern prophecies. A brief comparison of the Orson Hyde Dedicatory Prayer on the Land of Israel given October 24, 1842 with some of the verses from 1 Nephi 21 and 22 are an example. 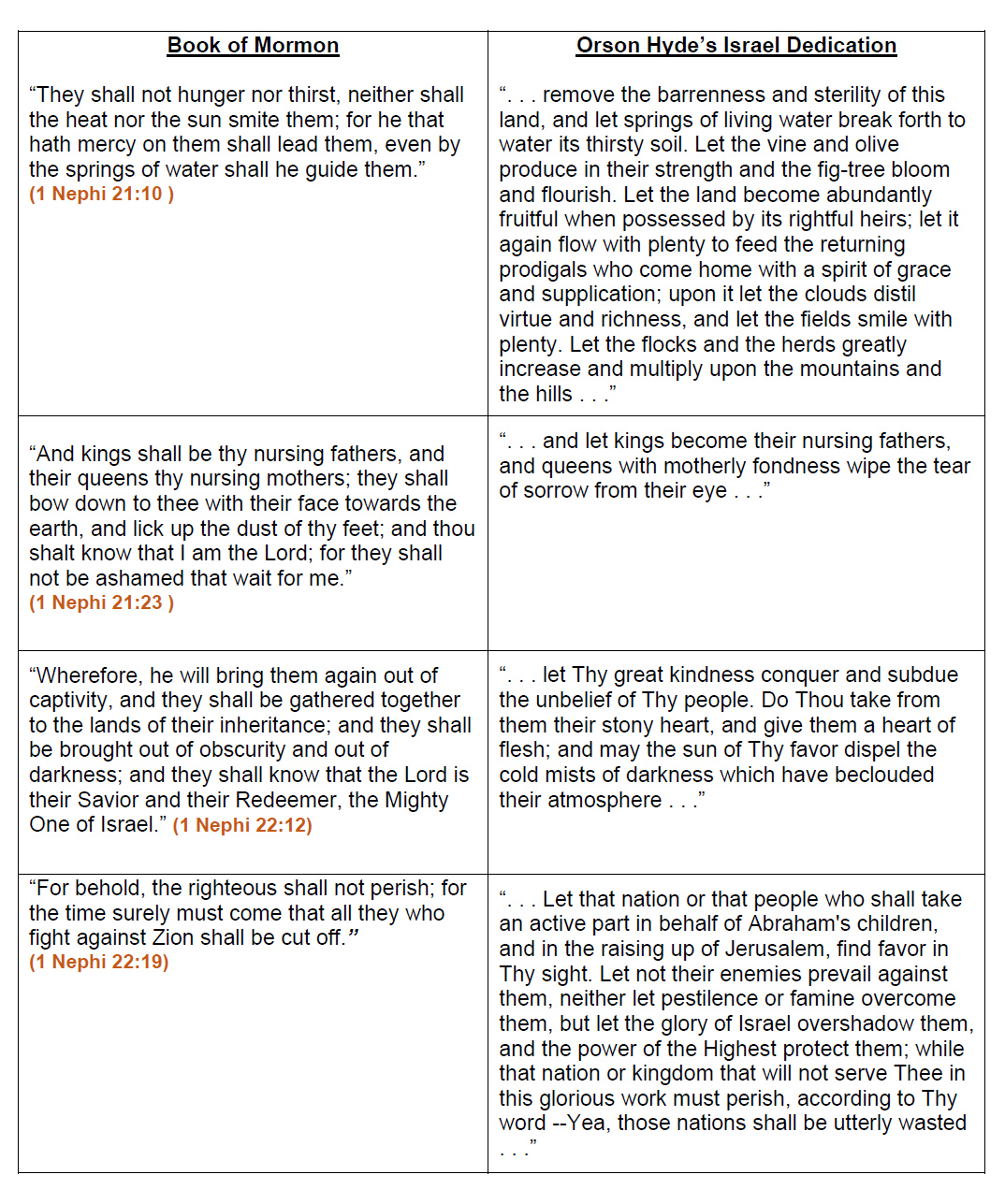