Nephi begins the record of his people—Lehi sees in vision a pillar of fire and reads from a book of prophecy—He praises God, foretells the coming of the Messiah, and prophesies the destruction of Jerusalem—He is persecuted by the Jews. About 600 B.C.

Lehi takes his family into the wilderness by the Red Sea—They leave their property—Lehi offers a sacrifice to the Lord and teaches his sons to keep the commandments—Laman and Lemuel murmur against their father—Nephi is obedient and prays in faith; the Lord speaks to him, and he is chosen to rule over his brethren. About 600 B.C.

Lehi’s sons return to Jerusalem to obtain the plates of brass—Laban refuses to give the plates up—Nephi exhorts and encourages his brethren—Laban steals their property and attempts to slay them—Laman and Lemuel smite Nephi and Sam and are reproved by an angel. About 600–592 B.C.

Nephi slays Laban at the Lord’s command and then secures the plates of brass by stratagem—Zoram chooses to join Lehi’s family in the wilderness. About 600–592 B.C.

Sariah complains against Lehi—Both rejoice over the return of their sons—They offer sacrifices—The plates of brass contain writings of Moses and the prophets—The plates identify Lehi as a descendant of Joseph—Lehi prophesies concerning his seed and the preservation of the plates. About 600–592 B.C.

Nephi writes of the things of God—Nephi’s purpose is to persuade men to come unto the God of Abraham and be saved. About 600–592 B.C.

Lehi’s sons return to Jerusalem and invite Ishmael and his household to join them in their journey—Laman and others rebel—Nephi exhorts his brethren to have faith in the Lord—They bind him with cords and plan his destruction—He is freed by the power of faith—His brethren ask forgiveness—Lehi and his company offer sacrifice and burnt offerings. About 600–592 B.C.

How can I understand what God’s will is for me?
The very first verse of the Book of Mormon reveals several keys to understanding God’s will. There is a lesson in honoring “goodly parents.” It is one of the basic commandments. “Honour thy father and thy mother: that thy days may be long upon the land which the LORD thy God giveth thee.” (Exodus 20:12) “It is also customary to visit the graves of deceased parents . . . The reasons for this custom vary from the belief that the righteous dead may help the living, to the idea that respect for parents and the inspiration gained from the example of their lives, are values to be emphasized especially at this time.” (Encyclopedia Judaica Jr.)

What is “going back or return?”
There is a message in going back to the “learning of the fathers.” The Hebrew word for “going back” or return is the same as “repent.” “Say nothing but repentance unto this generation; keep my commandments and assist to bring forth my work, according to my commandments, and you shall be blessed.” (Doctrine & Covenants 6:9)

How “mysterious” is the “Learning of the Jews”
There is a tutorial in combining an understanding of the “Learning of the Jews” and knowing the “mysteries” of the Lord. “For he that diligently seeketh shall find; and the mysteries of God shall be unfolded unto them, by the power of the Holy Ghost, as well in these times as in times of old, and as well in times of old as in times to come; wherefore, the course of the Lord is one eternal round.” (Nephi 10:19) In using the learning of his fathers, Nephi uses one of the typical ways of Jewish learning, to consider the “opposite” point of view. 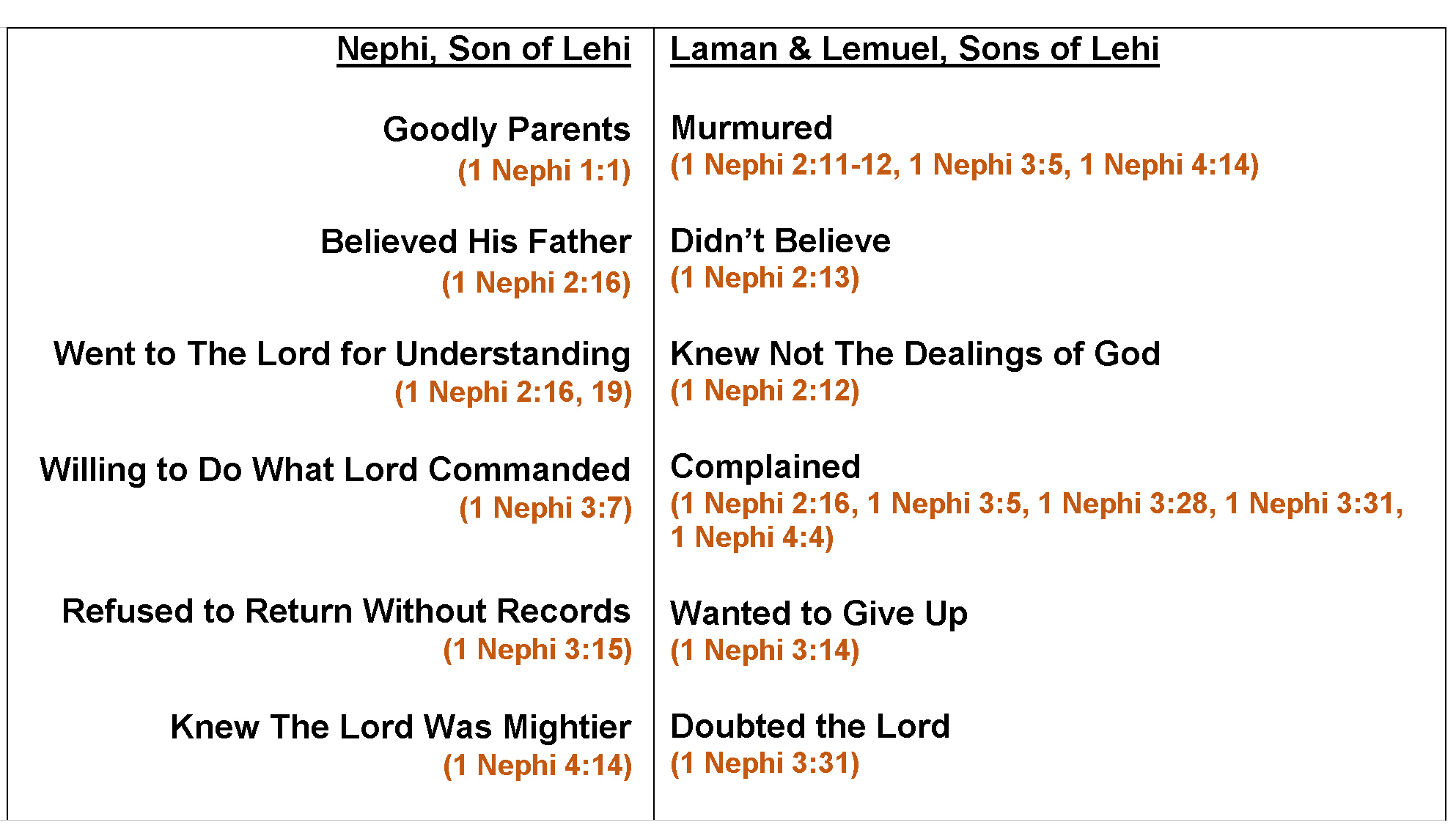 How do I recognize a counterfeit?
Nephi’s experience with Laban and the subsequent slaying of Laban can be compared to two other occurrences. In Jesus’ day, Caiaphas the high priest called for taking Jesus’ life and then perpetrated a scheme to have Jesus crucified. In 1995, Yigal Amir planned a scheme and then was convicted of assassinating Yizhak Rabin, the Prime Minister of Israel. In each case the justification of taking a life was based on the premise that it would “save the people.”

What and where is the “Lehi Cave” in Israel?
A display in the Israel Museum of Jerusalem shows artifacts from a cave some twenty-three miles southwest of Jerusalem in an area known as Lhi (Lahi or Lehi). They are dated to six hundred years before Jesus’ time and seem to connect to Lehi’s family departing the area of Jerusalem. The oldest-known writing of the name Jerusalem and the spelling out of the name Jehovah appears in this cave. Three sentences on the cave walls suggest that the writers were: Hiding from enemies seeking their lives, seeking forgiveness for wrong doings, and hoping for a salvation of Jerusalem. These could be considered similar to the descriptive Book of Mormon account of a “family of Jews” leaving Jerusalem in Judea at about six hundred years before Jesus’ time. Their father, Lehi, was one of the prophets of the day. “For it came to pass in the commencement of the first year of the reign of Zedekiah, king of Judah, (my father, Lehi, having dwelt at Jerusalem in all his days); and in that same year there came many prophets, prophesying unto the people that they must repent, or the great city Jerusalem must be destroyed.” (1 Nephi 1:4)

What happened?
Four brothers returned to retrieve their family and religious records. The record keeper sent his servants to kill them. Hiding in a cave, two brothers rebelled and then were called to repentance by a heavenly messenger. The brothers may have sought forgiveness. “And it came to pass that we fled into the wilderness, and the servants of Laban did not overtake us, and we hid ourselves in the cavity of a rock. And it came to pass that Laman was angry with me . . . And it came to pass as they smote us with a rod, behold, an angel of the Lord came and stood before them, and he spake unto them, saying: Why do ye smite your younger brother with a rod? Know ye not that the Lord hath chosen him to be a ruler over you, and this because of your iniquities? Behold ye shall go up to Jerusalem again, and the Lord will deliver Laban into your hands.” (1 Nephi 3:27-29)

How similar are these ruins to the Book of Mormon account?
The youngest of these brothers later became a prophet and wrote of Jerusalem in latter days: “And now this I speak because of the spirit which is in me. And notwithstanding they have been carried away they shall return again, and possess the land of Jerusalem; wherefore, they shall be restored again to the land of their inheritance.” (2 Nephi 25:11) Interestingly, that group was led by a man named Lehi and in archaeological records the cave is called “Khirbet (ruins) Bet (house) LHI (Lehi)”.