2021 Study Summary 9: The Worth Of Souls Is Great | Israel Revealed

“The Worth Of Souls Is Great”

Revelation to Joseph Smith the Prophet, Oliver Cowdery, and David Whitmer, given at Fayette, New York, June 1829. According to the Prophet, this revelation made known “the calling of twelve apostles in these last days, and also instructions relative to building up the Church.” 1–5, Scriptures show how to build up the Church; 6–8, The world is ripening in iniquity; 9–16, The worth of souls is great;17–25, To gain salvation, men must take upon themselves the name of Christ; 26–36, The calling and mission of the Twelve are revealed; 37–39, Oliver Cowdery and David Whitmer are to search out the Twelve; 40–47, To gain salvation, men must repent, be baptized, and keep the commandments.

Revelation given through Joseph Smith, at Manchester, New York, likely in the summer of 1829. In his history, the Prophet introduces it as “a commandment of God and not of man, to Martin Harris, given by him who is Eternal.” 1–3, Christ has all power; 4–5, All men must repent or suffer; 6–12, Eternal punishment is God’s punishment; 13–20, Christ suffered for all, that they might not suffer if they would repent; 21–28, Preach the gospel of repentance; 29–41, Declare glad tidings.

What happened to the principle of atonement?
Although the principle of “one atoning for our sins” in Judaism has diminished over the years, one day every year is set aside as the Day of Atonement, Yom Kippur. “The tenth of the Hebrew month of Tishrei is Yom Kippur, a day of fasting and prayer for all Israel, a day which has been significant to Jews throughout the ages. The Day of Atonement is the last of the Ten Days of Penitence which begin with Rosh Ha-Shanah, and is the climax of the repentance and soul-searching incumbent on every Jew during this period. Perhaps the most beloved ritual of the Day of Atonement, Kol Nidrei is . . . chanted before sunset as the . . . worshipers are wrapped in tallitot and some even robed in white gowns (kitels).” (Encyclopedia Judaica Jr.)

Where is one place on earth can we experience the results of repentance?
Since 1967, when Jerusalem became open for Jews, the congregant’s response is “Next year in Jerusalem-rebuilt.” This is an expression of rebuilding the temple in the mountains of Judah. “Behold, I will send my messenger, and he shall prepare the way before me: and the Lord, whom ye seek, shall suddenly come to his temple, even the messenger of the covenant, whom ye delight in: behold, he shall come, saith the LORD of hosts.” (Malachi 3:1) “I am Jesus Christ, the Son of God; wherefore, gird up your loins and I will suddenly come to my temple. Even so. Amen.” (Doctrine and Covenants 36:8)

What ultimately follows this earth-life?
The understanding of the term “resurrection” is quite lost by most Christians and Jews. In previous discussions we have pointed out that for Jews, the concept of God has diminished since the days of Biblical writings that constantly referred to God in anthropomorphic terminology. Likewise, the concept of life after death in a resurrected state has largely disappeared; and when used, it refers mostly to the righteous in a distant future. “Resurrection” is one of the Lord’s names. The Book of Mormon prophet, Alma, teaches that there is no resurrection until after the coming of the Messiah. Judaism, nowadays, has virtually no belief in resurrection or life, as such, after death. To the Jews, the Messiah has not come; consequently, it is understandable that they do not have an active belief in the resurrection. There are, however, benedictions and other statements with words that seem to connect to a former belief in Resurrection. “. . . Barukh mehayyeh ha-metim (‘Blessed be . . . He Who revives the dead’) is therefore also known as Tehiyyat ha-Metim (‘Resurrection of the Dead’) . . . “. . . the righteous of all generations will be reunited at the time of the resurrection of the dead during the messianic period.” (Encyclopedia Judaica Jr.)

When did the concept of resurrection begin to fade?
“They [Essenes] believed in reward and punishment; in immortality of the soul; but not in physical resurrection. “Some rabbis believed in resurrection. That is that at a certain point in time God will bring everybody back to life and then the world will be a perfect place and physical life will go on indefinitely. This doctrine poses some obvious difficulties: the body actually decomposes after burial so how can it be reconstituted; furthermore what about overpopulation of the world? Those who believe in resurrection claim that anyway the whole process will be miraculous, and the miracle will solve all the problems. Other rabbis however denied physical resurrection entirely and understood the afterlife to be a completely spiritual experience.” “The argument about resurrection lasted well into the Middle Ages, and was one of the reasons for the sharp attacks against Maimonides. Many believed that he denied the doctrine and his views started a controversy that lasted for hundreds of years. In modern times most Jewish theologians do not subscribe to the doctrine of physical resurrection and movements such as Reform Judaism do not consider it to be a necessary belief for the Jew.” “The whole subject of [an] afterlife is not explicitly stated in the Bible and many scholars are of the opinion that belief in [an] afterlife was adopted by Jews during the Babylonian exile after the destruction of the First Temple when they came into contact with eastern religions such as Zoroastrianism. “The Sadducees also rejected the Pharisaic belief in the immortality of the soul and the resurrection of the body, claiming that there is no basis for these beliefs in the Torah.” (Encyclopedia Judaica Jr.) Remember, the Pharisees still believed in a resurrection, the Sadducees did not. Some might say, “That‘s the reason they were “sad, you see!”

How can I prepare for a happy resurrection?
The process of resurrection also depends on our preparation. That includes repentance. The Lord’s first message to the Disciples in the “Americas” was the same as to the Disciples in the Land of Israel, and repeated in Latter-days is that of repentance. The word “repentance” in Hebrew literally means “to turn” or “return.” “Repentance in Hebrew is known as teshuvah, which literally means ‘return,’ and signifies a return to God. A person who repents his sins is known as a ba’al teshuvah. Many rabbis of the Talmud believed that the real ba’al teshuvah is greater even than a person who has never sinned and they furthermore said that when a person repents out of love of God (and not just out of fear of divine punishment), all the sins he had committed are considered to be mitzvot. This is perhaps the most comforting doctrine that Judaism has given to the world.” “A unique aspect of the Jewish faith is that although God rules the world with absolute justice, He is also merciful and forgives sins against Him. The doctrine of repentance is based on this belief.” (Encyclopedia Judaica Jr.)

Who is the Suffering Servant?
The Lord descended below all things and then rose above all things. In the last few days of His life, the atonement sequence reports that he was imprisoned. Likely kept in a pit while the High Priests sought false witnesses. “I am counted with them that go down into the pit: I am as a man that hath no strength: Free among the dead, like the slain that lie in the grave, whom thou rememberest no more: and they are cut off from thy hand. Thou hast laid me in the lowest pit, in darkness, in the deeps.” (Psalms 88:4-6) In that sense, He came from the rocks below and ascended to the heaven above. Because they are special witnesses of Him, this suffering is often reflected in each of the prophet’s lives. Those who know Him best and are destined to testify of Him the most are often subjected to the worst. I know of a religious instructor visiting Israel who asked religious Jews why they were chosen. One responded, “We are chosen to suffer.” Later, in making a point about the Savior’s suffering, the instructor said, “No one is chosen to suffer other than the Lord.” Yet, I believe that the difficulties, calamities, and sufferings of the Jews will ultimately bring them closer to the Lord who covenanted to remember and save His people. Sufferings bring us closer to Him and those having the highest responsibilities of serving Him often suffer greatly. They “sink to new heights.” “And if thou shouldst be cast into the pit, or into the hands of murderers, and the sentence of death passed upon thee; if thou be cast into the deep; if the billowing surge conspire against thee; if fierce winds become thine enemy; if the heavens gather blackness, and all the elements combine to hedge up the way; and above all, if the very jaws of hell shall gape open the mouth wide after thee, know thou, my son, that all these things shall give thee experience, and shall be for thy good. The Son of Man hath descended below them all. Art thou greater than he?” (Doctrine & Covenants 122:7-8)

What do the names of the Lord mean to me?
The following is a partial list of symbolisms and/or names of the Lord. Each name has one or more, historical and prophetic, descriptions of the Savior and his mission. I added some thoughts that may come to your and my mind as we read more than 100 names, titles, and concepts of the of the Savior in the scriptures. 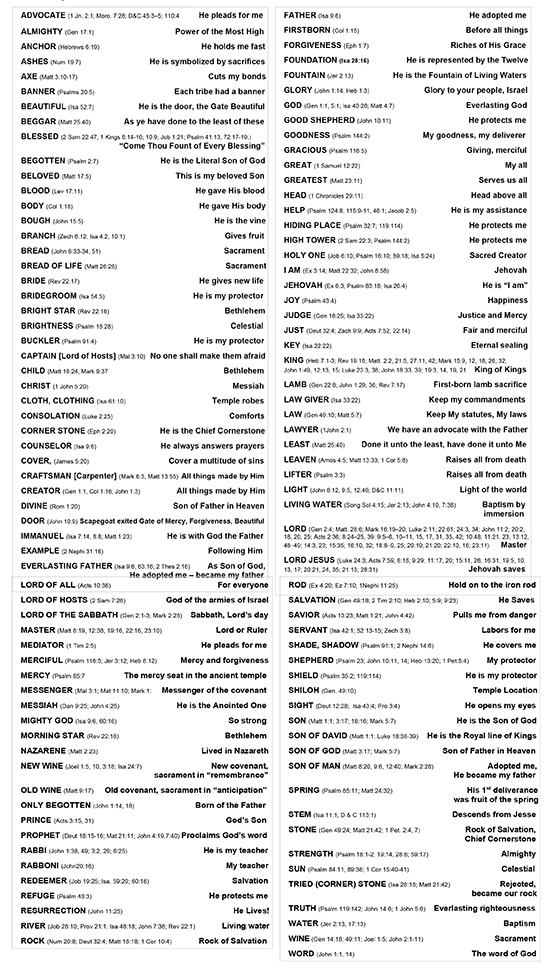