Here’s a delightful play on the words, not and knot. It could help see things as they were and as they are. Let’s go back about two-thousand years and look in on the Apostle Peter, living in Jaffa, along the Mediterranean, who saw a vision that he described in detail.

He saw heaven opened, and a certain sheet knit at the four corners, descending. Wherein were all manner of beasts of the earth, creeping things, and fowls of the air. The voice said to him, “Rise, Peter; kill, and eat.” But, Peter said, “Not so, Lord; for I have never eaten anything that is common or unclean.” And the voice said, “What God hath cleansed, that call not thou common.” This was repeated three time before the vision closed. (Taken from Acts 10:10-16) 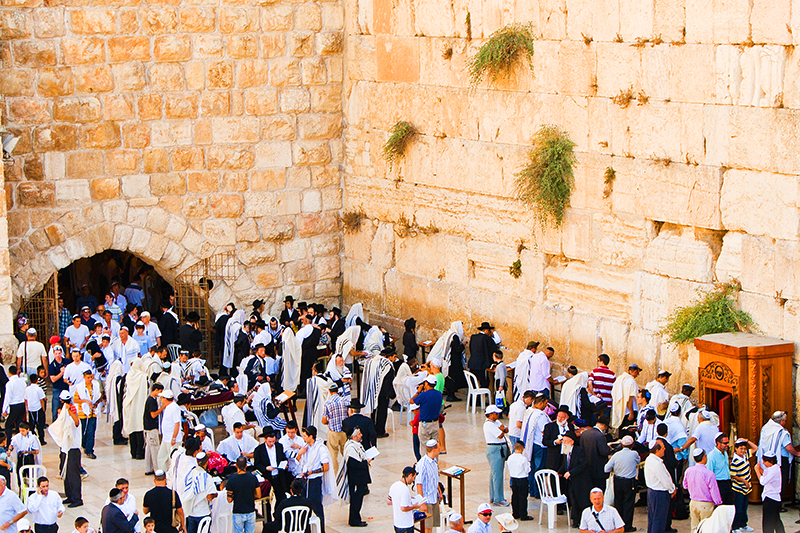 Jews praying at the Western Wall in Jerusalem, Israel

Peter, a Jew, describes the vison he saw of a sheet, likely a “Talith” (known to many as a Jewish prayer shawl). It was the sixth hour of the day (noon), Simon Peter apparently was praying. Religious Jews pray three times a day, covering their heads and using the special prayer shawl, the Talith, over their shoulders. During his prayer-vision, Peter saw, a sheet with knitted or knotted corners – likely a Talith, – filled with all sorts of common or unclean foods, not to be eaten. Today, this would be called unkosher. An angel commanded Peter to eat of those foods, contrary to Jewish dietary law. The vision was a symbolic contrast: the Talith used in the ancient temple as a holy garment, and today with its 613 knots and strings symbolizing the Mosaic law, now filled with foods the Law of Moses said, not-to-eat. Visions do contain sights and sounds that convey vital information.

The Talith knots and strings clearly represent 365 “do not” commandments as well as 248 “do” commandments. Peter is describing a dramatic updating of the law, the “nots,” as represented by the “knots”.

Going back is a wonderful exercise because truth and law remain the same. In Peter’s vision, the “how to” part of keeping the law of health was changed. Peter lets us know how startling that change was. Yet by accepting revelation, the knots and the nots were adjusted!

Daniel & Steven Rona of Israel Revealed are your only LDS licensed tour guides in Israel. For more insights on the Holy Land visit our blog on Israel.